Driving through the flat desert leading into and through Big Bend, Jackson and I noticed random windmills, not turbines, in the distance. Sometimes they were near a farm. But more often than not, they were solitary towers amongst small stands of trees and scrub. Not seeing the need for electricity, the best answer seemed water. The question that follows then is: What water?

As it turns out, many of these windmills were connected to an actual desert oasis, two of which we visited within Big Bend. Not only did these oases have a hidden source of water, but they also had another treasure: birds.

The first oasis we visited was called Dugout Wells. From the road, you can just barely seed the gray paddle like blades still over the scrub. But as you make your way up the dirt road, the tower grows and so do the trees. Other than Boot Canyon, these were some of the tallest trees we’d seen in the park, especially in the middle of the desert. They were full size and when you rolled down the window, the sounds of birds emanating from them was incredible.

At first, the coo of the White-Winged Dove, more like the hoot of a barred owl, rang out from every direction. Fortunately, they would burst from the trees as we neared them, allowing for other birds to make an appearance. However, to be able to identify them, we would have to get out, which meant braving the 100-degree temperatures.

Taking a breath, we entered the oven and faced the oasis. Immediately, a new, sweet song greeted us. The source kept flitting around one of the shrubs, but it was very difficult to focus on. What we did notice was the flash of yellow. Finally, we got a picture and were able to zoom in on it, recognizing the bit of red on its wing and the yellow head. The bird was a Verdin.

After a fascination with this little bird, we descended into the relative coolness of the oasis, following the much louder call of a bird in the taller trees. Its song ranged through all sorts of pretty patterns, which gave us the impression of a Northern Mockingbird, which we had seen all over the South but not so much in these parts. However, it’s call was different and the size of it shadowy figure hidden in the leaves led us to believe it was something else. At one point, when it peaked out at us, we discovered the first truly distinguishing mark, its beak. Long and curved like a thin saber, we had a pretty good feeling for what it was, at least Jackson did. Eventually, it became braver and stood out full on a bare branch and let loose its full song, the curved bill spliced open. There was no doubt it was a Curved-Bill Thrasher.

Deeper into the small oasis, where we began to notice actual mud in the desert, more bird sounds floated out from the dark leaves, mingling with the ever-increasing buzz of bees. One of the more distinctive songs was a series of quick raspy notes, which we later identified as belonging to the Bell’s Vireo.

By the time we made it into the center of the oasis, we began worrying about snakes and the setting sun, not to mention the toll the heat was taking on us, even in the shade. Though we had only seen a few birds, we knew it was a place to return to. And as we headed to our car, the Verdin sang to us again, promising more experiences. But so did a pack of coyotes in the distance.

Amazingly, though, we learned that you don’t have to be in the oasis to find all of the birds. Just the promise of nearby water seemed to keep other birds close by in the desert. The first bird we noticed on the way out was probably the most unexpected: a Loggerhead Shrike. Perched high on a dead tree in the sunset, we could only see its silhouette at first. Luckily, we were able to get a better perspective on the other side. 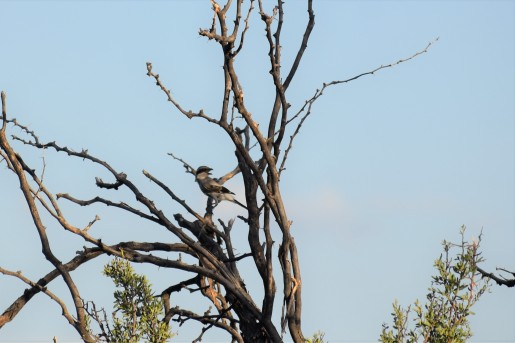 Realizing the promise of more birds, we rolled down the windows again and crept along the dirt road, a practice we adopted the other times we returned to this spot. During this approach, we were able to capture more songs, shadows, and perfectly sunlit pictures of birds sitting on various species of cactus, including the Black-Throated Sparrow,  Cactus Wrens, and the long-sought-after Pyrrhuloxia.

All of these birds, as well as the Scaled Quail, Ladder-Backed Woodpecker, and Greater Roadrunner, were seen in our many visits.

Another oasis we visited was at the site of an old ranch, Sam Nail Ranch. And despite the even hotter temperatures at this point of the desert, the Sam Nail Ranch oasis seemed more vast and damper. But getting there took its toll since we had to walk down a winding path through the desert, passing an abandoned adobe building and a sign saying “Do Not Drink the Water.” Luckily, we never went anywhere without water. Otherwise, I could picture us as a couple of sun-scorched skeletons laying against the well that the windmill pumped water from.

As I said, the heat still took a toll and we had a hard time focusing on the different bird calls and sightings. Plus, once we got into the oasis, our desert eyes had a difficult time picking out details in the shadow. Still, we were able to hear some familiar sounds, including the Bell’s Vireo, as well as two new ones: Black-Tailed Gnatcatcher and Yellow-Breasted Chat. We wanted to see more and explore all of the paths. The woods here were a jungle in the desert, but we were too hot and nervous. More than any other place, this felt like a spot for snakes. Even so, we were shocked when a large, pink snake (more than five feet long) slithered in front of us. We had been warned about the nonvenomous Coachwhip Snake and how aggressive it could be.

Our path blocked, we decided it was a sign that we should go back to the safety of one of the park stations and cool off for a while. But as mentioned earlier, these oasis locations became a favorite place to revisit each day. Though we never did go back to Sam Nail.