Despite temperatures that reached 103 and exhaustion from the travels of the day before, we persevered an cracked the Family Big Year goal of 250.

We weren’t sure at first. Birds don’t tend to be out in the middle of the day in such extreme heat. However, these are desert birds. Just like humans, they just take it a little easier.

Aside from our early morning spotting of Cliff Swallows and a Zone-Tailed Hawk during our drive, our first real expedition took place on a trail a few hundred feet away from our tent. As everywhere else, the mockingbirds taunted us and made it difficult to differentiate. Eventually, during our descent, we came across a Lesser Goldfinch, a Cactus Wren, and an Ash-Throated Flycatcher. The latter hung around and posed for us with an insect in its mouth. And the small Cactus Wren surprised us with its loud, aggressive call. 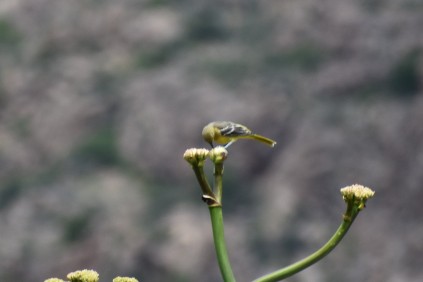 Further down the trail, with the sun beating down on us, Jackson spotted one of the birds he had really hoped to find: the Varied Bunting. In the distance, it was difficult to see the reds, blues, and other colors. But by zooming in and also recording its song, it was a definite identification. 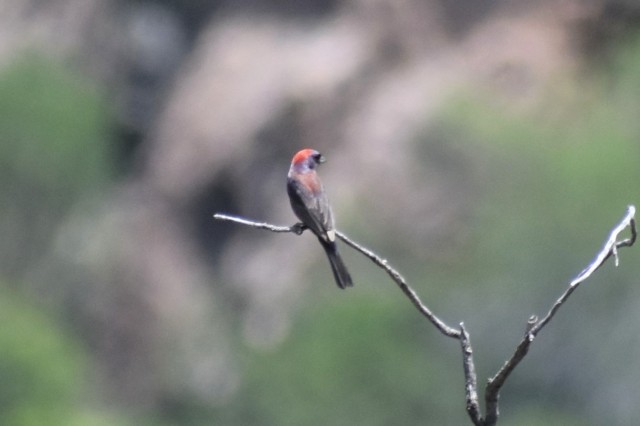 The further we went, though, the hotter it got. Finally, we decided to turn around. I had noted to Jackson that we could have a cool respite back at Panther Junction visitor center while listening to a lecture on bird calls. That was enough promise to push back up out of the canyon, with a few stops here and there, including the spotting of a Scott’s Oriole.

Moments before we climbed the last rocks into the campground, Jackson jumped to the side. When I looked at where he had jumped from, a three-foot snake slithered by. He said it was non-venomous.

Now about that cool break I promised him, it never happened. I missed it by a day. But he didn’t mind as we sat in an air-conditioned car to travel 45 minutes to another spot past the junction and halfway to Rio Grande Village.

Eventually, as we pulled off onto a dirt road, surrounded by a variety of cacti and other plants. We had been told this was a place to find Ladder-Backed Woodpeckers and hummingbirds, as well as lots of other birds. What we eventually found was a desert oasis with an old windmill pump at its center. Full-sized trees stuck up out of the cacti and small streams of water magically appeared. And everywhere you looked were doves. And luckily the shades of those trees made the 100 degrees bearable for about 20 minutes, which was enough time to find a Verdun, a Ladder-Backed Woodpecker (as promised), and a Bell’s Vireo. The Verdun was a conundrum for a long time. It was such a tiny bird with a yellow head and sweet song. 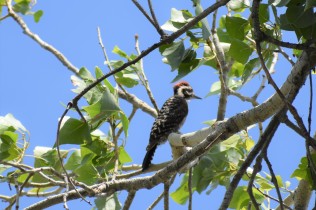 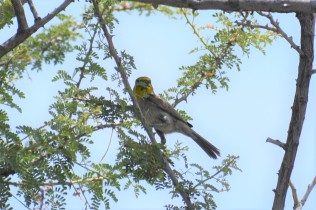 Not wanting to go back to our campsite yet and sit around in the heat, we decided to drive the rest of the way to Rio Grande Village, where a large portion of Big Bend’s birds can be found. But as we were warned, it would be the hottest place in the park and therefore unbearable for humans and birds. Still, we trudged up the path, seeing nothing living. Actually, the only creature we did see other than fellow fools suffering the 103-degree heat was a couple of dead giant centipedes. That was enough to turn us around. The one piece of beauty during that walk, though, were some handmade beaded and wired creatures, as well as painted walking sticks, left on the path with price tags and a can. Since I didn’t have the correct money on me, I had to pass. But I do plan to go back there in the next couple of mornings and choose one for Fiona.

Back at our camp, the sun was beginning to lower in the sky and we had picked up a few more birds around us, including a Canyon Towhee and Say’s Phoebe and a Road Runner near our tent. And yet we still had a lot of daylight left, but not much energy. By 6:00, the temperature was still 90. And by 7:00, Jackson was determined to go to sleep, which was not easy with all of the bird calls and light around us. 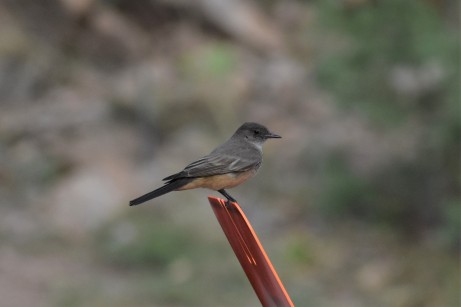 Finally, at 8:00, with only one more bird until we reached our Family Big Year goal, we decided to go for a sunset birding expedition. Not wanting to go to far and get caught in the dark with all of the possible creatures that crawl and slither out then, we opted for the Dugout Wells again.

This time as we entered, a dusky glow around us, we felt alone in the world, all except for the birds. Within ten minutes, we had discovered three Curved-Billed Thrashers and a Pyrrhuloxia, a bird Jackson had been talking about for a long time. Unfortunately, we didn’t see it, but the song was unmistakable. 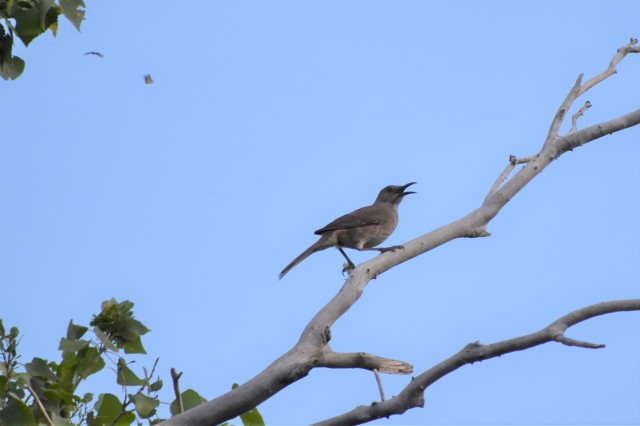 Riding back home, we felt full and happy, watching the northern mountains bathed in both sunset red and flashes of orange lightning. I assured Jackson all of it was hundreds of miles away. 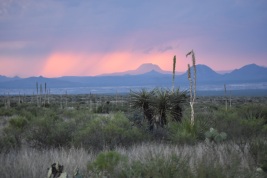 But as he finally went to bed and I heat a cup of coffee over the remaining embers, typing this entry in the dark, the canyon walls became illuminated as the lightning, thunder, and rain crept closer.

One thought on “Big Day in Big Bend”

Follow The Year of the Green Kingfisher on WordPress.com