National Park. But before we left, we saw a Eurasian-collared Dove on a wire outside our hotel. While driving along the highway, we saw a few egrets in marshes along the side of the road. We kept looking for new species, and suddenly we saw hundreds of birds flying over us including Wood Storks, which were a new species for us this year. We spotted another new species, Limpkin, on a patch of grass by the highway.

We eventually reached the Big Cypress National Preserve visitor center. Maura and I went inside while Fiona and Bruce waited in the car. The rangers and the visitor center told us to go to Monroe Station and turn onto the loop road, which was a small dirt road about 20 miles long that took about an hour to complete. While I was looking for a map, Fiona ran in and told us that she and Bruce spotted a Palm Warbler

outside our car. I got outside fast enough to see it before it flew away, but Maura couldn’t get out until it was gone.

Leaving the center, we kept driving. When we turned on to the road, there wasn’t much to see at first. But eventually, we noticed a few cars stopped up ahead so we got out and asked them what they saw. They pointed out a juvenile Yellow-crowned Night Heron sitting on a log sticking out of the water. I saw a few White Ibises in the swamp behind the heron. 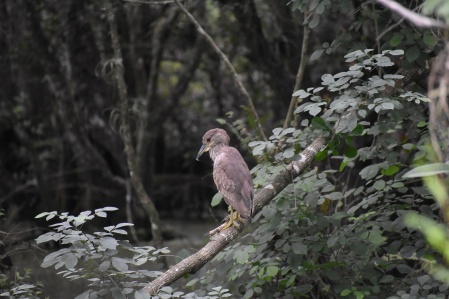 We kept driving along the road, stopping every once in a while to look into the swamp.

We saw a lot of vultures and a few Great and Little Blue Herons. Near the end of the road, we saw a car slow down and some people looking out of it. We parked our car on the side of the road and got out to see what it was. We realized it was just an alligator and the people in the car probably weren’t birders like us. But as we kept looking, Fiona and I saw a Green Heron fly behind a bush and out of sight. We ran back to the car to get Maura and Bruce and although we didn’t see the heron again we heard its distinctive call from behind the bushes. Before we got in the car we heard a Bald Eagle calling down at us.

We kept going down the road and were deciding whether to drive south towards the Anhinga trail or go to Crandon Park in Miami, where some rare tropical birds had been spotted recently. Eventually, we decided to go to Crandon Park.

It took about 45 minutes to get there. But on the way, we saw a Cooper’s Hawk fly across the road. When we pulled into the parking lot, we saw a flock of Egyptian Geese grazing in the fields outside of the park. Once we found the entrance to the gardens, we heard a screaming sound that we realized was an Indian Peafowl, which was just added to the ABA list of countable birds this year. 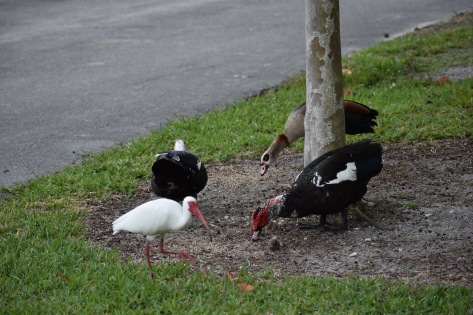 As we were looking around the ponds, we spotted a few Muscovy Ducks walking around. Walking toward another pond, with the hope of some new waterfowl, we saw two Sandhill Cranes walking by the water’s edge and swimming in the reeds were a pair of Common Gallinules with their babies. We spent a long time trying to get the perfect picture but we eventually decided to move on. 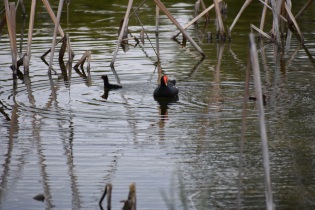 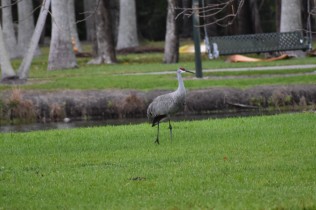 We spent the next 15-20 minutes looking around getting pictures of Ibises, Egyptian Geese, and other water birds. At one point, we saw a bird flying directly over us and we eventually figured out that it was a Magnificent Frigatebird which was another new one this year. While we were trying to figure out how to get to the nearby beach we got lost and tried a lot of different trails trying to get out and one of them had fake alligators to try to scare people. At first, we thought they were real but then realized all of their tails were missing. 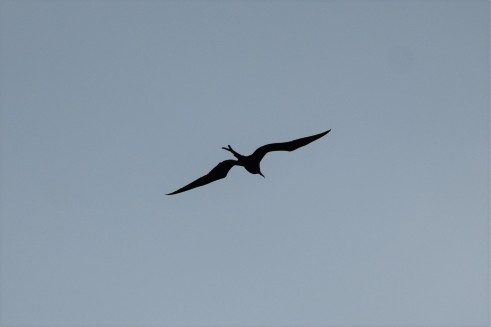 Eventually, after finding our way out, Maura and I started going down to the beach while Fiona and Bruce stayed by the ponds. Our plan was to meet at our car in fifteen minutes. But the beach didn’t have many birds on it so we went back to go find Fiona and Bruce. Before we got to the gardens where they were, we spotted a Red-bellied Woodpecker. After I took a few pictures, Maura pointed out another bird higher up in the tree. I took a few pictures and then continued walking.

After a while, I saw Fiona running down the path and when I caught up to her she told me that she thought she and Bruce saw the rare Thick-Billed Verio that was seen here earlier. Bruce and I ran back to where it was and I just got a glimpse of it before it flew away.

When we got back to the hotel we reviewed a few of our photos from the day. We took a closer look at the two pictures of what we thought was a Thick-billed Verio and decided that it was, in fact, a Yellow-throated Warbler.

Finally, when we were up on the rooftop pool at our hotel late at night, we heard a sound off in the distance. At first, we thought it was nothing. But then as we listened to the sound again we found out that it was an Eastern Screech Owl in Simpson Park next door.

At the end of the day, we had seen 44 species, 107 this vacation in the southeastern United States, and 139 for the Big Year.