It was the fourth day of our trip to LA, MS, AL, and FL. We were on our way to Jackson, MS, and we had decided to stop by the Ross Barnett Reservoir. There had been recent spottings of Common Gallinules there and we wanted to check it out. A dirt road had led us to warning signs for Carbon Dioxide Pipelines, which made us wonder if we were in the right place.  We continued (just in case).

Sure enough, there was a body of water all around us which was probably going to be a good place for us to find waterfowl. As we drove by, we saw tons of American Coots overtaking the water. We stepped outside for a few minutes, making sure there was nothing else hidden within the flock and then moved further down the road. 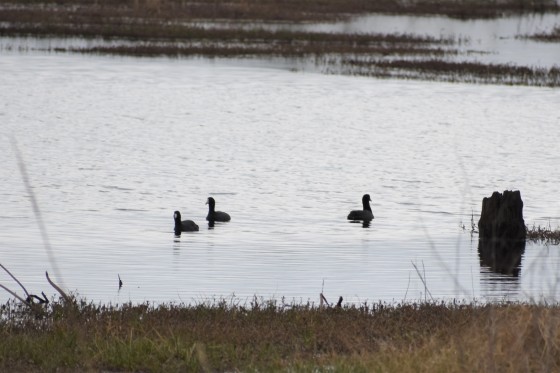 We drove slowly and cautiously, so that we wouldn’t miss anything, when Maura spotted something walking around in the marsh grass. Jackson took a look at it and immediately identified the Common Gallinule! We got out and took some pictures of the beautiful birds. As Maura was taking pictures of the Gallinules, she noticed that they were walking less than a foot from an alligator. (We were pretty surprised that they didn’t become its lunch).

When we were done observing the Gallinules, we hopped back in the car and continued. A little while later, Maura again pointed out into the marsh grass. There were more Gallinules, but this time with little babies tagging along as well! We all took a deeper look at the birds and Bruce saw something different about a few of them. He showed them to Jackson and he said that they were Blue-Winged Teals. As well as the Blue-WInged Teal and the Common Gallinule sightings, I spotted an Eastern Towhee in a bush by the road.

We left for the car and kept driving down the road. I hadn’t realized that Jackson, Bruce, and Maura had all seen the Blue-Winged Teal until we got back in the car. But luckily Maura pointed me towards them before we took off.

The rest of the ride was really bumpy and we didn’t see any more birds, but it was a great experience!

One thought on “Common Gallinules on the Pipeline”

Follow The Year of the Green Kingfisher on WordPress.com